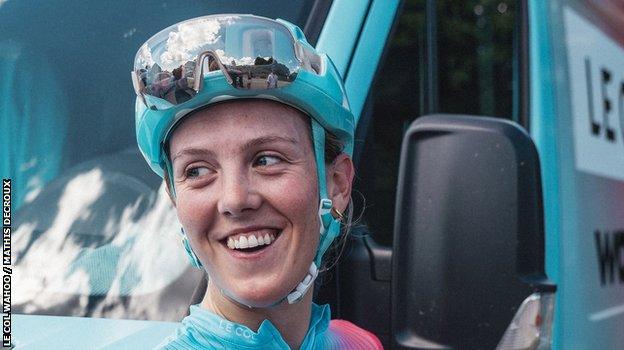 Lizzie Holden is a Manx rider for the British Le Col Wahoo team and will be competing in the inaugural Tour de France Femmes, which takes place from 24-31 July.

When I was growing up in the Isle of Man, I used to rush home from school every day to watch Mark Cavendish in the Tour de France.

On Sunday, I will be riding in it myself. It’s a huge moment, for me and my sport.

The profile of women’s cycling has grown so much in the past few years anyway, but the launch of the Tour de France Femmes is another massive step, in terms of exposure and everything about the size of the event.

For example, there is live TV coverage of each of the eight stages, something that is routine for men’s cycling but has not always been the case for us.

I turned professional in 2017 and it used to be so hard to find a way of watching some women’s races. You sometimes had to follow someone’s random live stream on Facebook and just see whoever was going over the finish line.

You would have no way of knowing what had actually gone on in the race, but having it televised properly means people can see how exciting women’s cycling is, and obviously also makes it far more attractive to the sponsors who fund it.

That’s all part of growing the sport as whole. It’s getting bigger and better anyway – but of course the Tour has an important part to play as a platform too.

The men’s race is one of the biggest sporting events in the world, watched by millions worldwide. Even people who don’t follow cycling will see some of it, or will at least have heard of it.

When I was cheering on Cav, I didn’t even think about why women didn’t have a version of their own – I just loved cycling anyway.

But now the women’s Tour is finally here – and on the calendar for the first time since it appeared under a different name and format in 1989 – you realise how many new people it will bring to our sport, and how it can inspire the next generation.

A special way to see Paris for the first time

At the beginning of the year I started thinking it could be a possibility for me to ride the Tour, but my team – Le Col Wahoo – were relying on a wildcard to get in.

In March the team got the nod and we all started to get excited, but still had to wait to find out who would be picked.

I’ve been having a good season so I did get my hopes up, but I only got the phone call to say I was on the team about three weeks ago.

That was the time when I started thinking ‘OK, this is really going to happen’, and now it is getting closer, it is starting to feel real.

The first stage is in Paris on Sunday, just before the final stage o
f the men’s race and around the iconic circuit of the Eiffel Tower and Champs Elysees.

I’ve never even been to Paris before, so it is going to be a pretty special way to see it for the first time. There will be big crowds and the atmosphere is going to be amazing.

I’m looking forward to the rest of the race too – well, most of it! It’s quite nice that the big mountain stages in the Vosges are at the end.

Hopefully we will have some opportunities before then. We have some really strong sprinters on our team and a lot of riders who are strong in the breakaways and can win from there – but most of the 144 women in the Tour will be thinking exactly the same thing.

Dreaming of a stage win

Whatever happens at the Tour, I will still get a buzz out of riding alongside legends like Marianne Vos over the next few days.

Long-term, my ambition is to get closer to that level – competing with the best riders in the world. One day it would be incredible to be like Lizzie Deignan, another hero of mine, who is just so consistent at fighting for titles.

Right now that seems a long way off, but at 24 I am just enjoying the life of a professional cyclist and who knows where hard work can take me next.

I never really thought about this being a career when I was younger. My dad, Rob Holden, was a pro rider too but he never pushed me into cycling.

I started it when I was really young but didn’t enjoy it and got into swimming instead. That is what I did for six years or so and then when I was 12 or 13 I tried again, made some friends in the cycling community on the island and it took off from there.

It was a big jump when I moved to Girona after signing for a Spanish team in 2019. I only came out for a few weeks of winter training but loved it, and then I met my boyfriend – Australian rider Nick Schultz – and ended up staying out here.

Nick has got his own dreams on the Tour and he could not have come much closer to getting a stage win in stage 10 this year, when he lost out to Magnus Cort in a photo finish.

I was actually in a physio session that afternoon but I knew he was in a breakaway. When I came out I got it up on my phone with 10km to go and I was watching it in the middle of town, with my head in my hands. People were looking at me like I was crazy – I was so gutted for him.

That’s the magic of the Tour de France though – getting to wear the yellow jersey is so special, but a stage win can be career defining too.

There obviously isn’t the same history yet for the women, but it’s still the Tour and it carries over that significance. Of course it’s a target for me too – you have to dream, otherwise what’s the point?