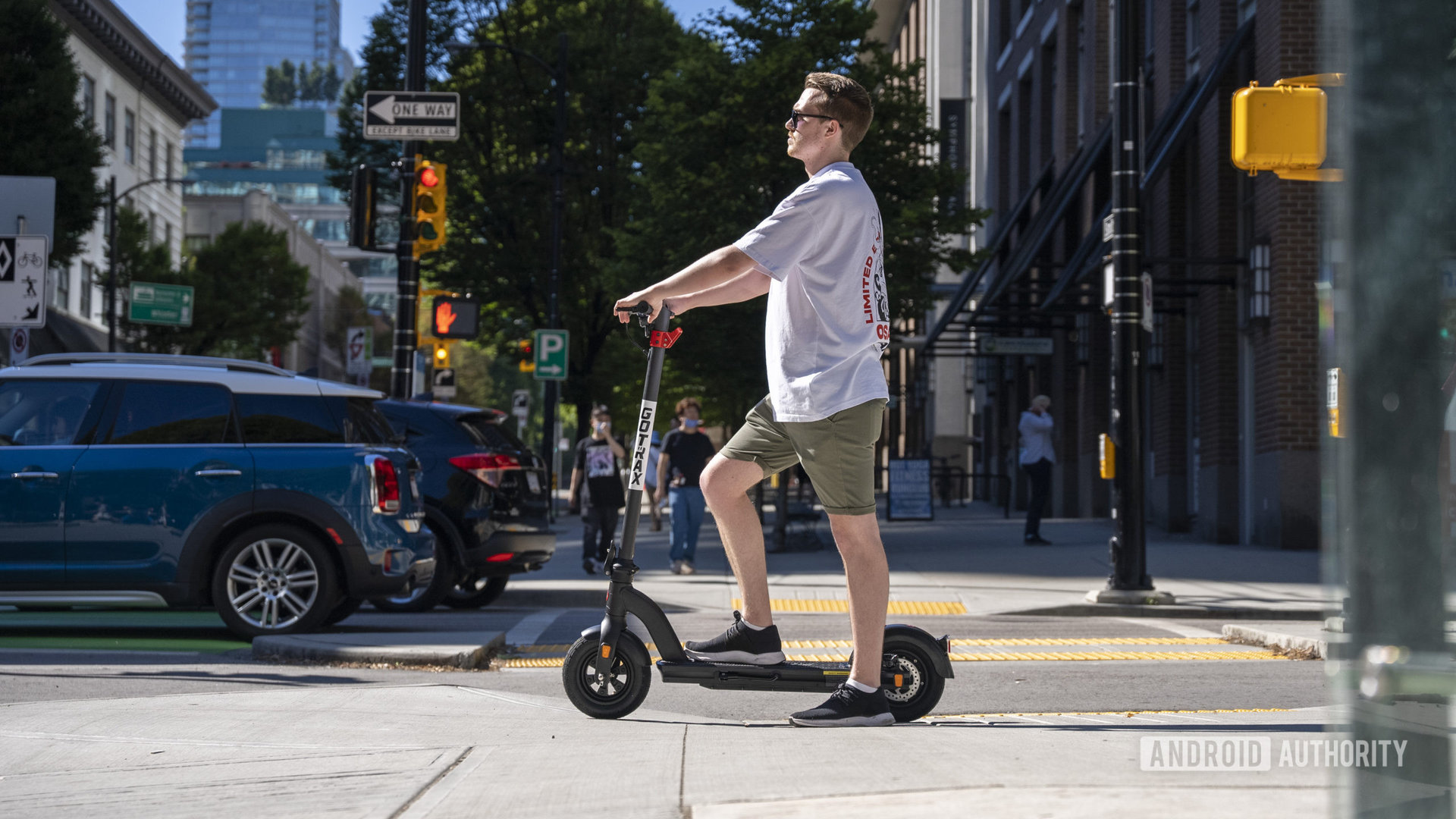 In an effort to cut down on carbon emissions, my city has seen the rise of numerous bike lanes and an increasing number of gadgets zipping down them. There’s a lot of new technology for transportation, from electric bikes and scooters to e-boards and futuristic-looking unicycles. I wanted to see what the electric vehicle (EV) craze was all about and decided to buy an entry-level e-scooter to ride to work over the summer. Was the commute as much fun as it looked? Here are five things I learned from riding an electric scooter for the first time.

Read more: Electric-scooter buyer’s guide: Everything you need to know

It’s easy to learn how to ride a scooter

For the uninitiated, it may seem daunting to catch up with all the EVs whizzing down the road. Rest assured, however, that there are surprisingly few learning curves to riding an electric scooter. I decided on getting the Gotrax GXL V2 ($348) because it was an affordable model catered to first-time riders and had twice the range I needed to travel to the office and back home on a single charge.

When it finally arrived, the Gotrax GXL V2 was easy to assemble, and after a four-hour charge, it was even easier to ride. As a bicycle rider, I found a familiar handbrake and bell on my left. On my right, a tempting thumb throttle which I kept itching to press. My first test run was around the desks in our open office space (which might have compelled a few of my colleagues to put on their noise-cancelling headphones), and then I took it outside for a real road test.

After a few days, I felt I had mastered the basics of riding an electric scooter. And after a few weeks of commuting, the fun factor is still far from wearing off.

With one foot planted on the scooter and the other pushing off from the ground, a simple throttle turn was all it took to pick up speed and maintain balance. As for slowing down, I found the brakes on this model slightly inconsistent, at times slow to stop and other times too abrupt. The higher your speed when braking, the faster they will wear out and require maintenance.

Turning is easy enough, especially if you can afford yourself a wide radius. However, you can’t really signal your turns since you need both hands on the handlebars, though some newer higher-end scooters have added light-up signals for this reason.

The first thing I felt when riding my Gotrax was every bump and crack on the road. One feature my e-scooter didn’t have was a suspension, and my knees certainly would have appreciated some support. Even if your commute is primarily flat pavement, I recommend investing in suspension or thicker tires to roll over any surprises on the street smoothly.

The second thing I noticed was the reduction in speed up the slightest inclines. The 250W motor would struggle to climb any hills, and it took a few push-kicks to help propel me upslope. Hills will also drain the battery faster, reducing the max range. Look for a 350W or even 500W motor if you want to travel longer distances or over sloping terrain.

While the scooter is fun under the sun, I don’t anticipate using it for most other West-coast seasons since it isn’t waterproof. As soon as it started raining, it quickly became slippery under the wheels. There’s also concern that any splashes could damage the electrical components. If you live somewhere wet, look for a model with an IP rating of at least five but preferably six (IPX5 or IPX6) for protection against the elements.

Lastly, there’s the portability factor. While the Gotrax GXL V2 only weighs around 25 lbs, the folding clip (or lack thereof) made it difficult to carry. The plastic latch did not pass the shake test and would fly open unexpectedly. If you are planning to carry your scooter on transit or through public spaces, take my advice and invest in one with a strong enough lock to keep the scooter folded, such as the Gotrax G4.

Legality is a grey area

Initially, I wasn’t sure about speed limits, and it seems most municipalities don’t know what to set them at either. My city is in the middle of a three-year pilot program for electric scooters, threatening to ticket anyone moving faster than 25 km/h down roads. Still, that doesn’t stop some riders from doubling that with higher-end models. Though, most budget-friendly options will have a motor limited to ~25 km/h, erring on the safe side of regulations.

Research your city’s laws before pulling the trigger on a purchase.

There was also the issue of where I was allowed to ride my e-scooter. For example, I was looking forward to riding along the seawall of Stanley Park, only to discover that it was limited to bikes and pedestrians.

Lastly, certain areas have different regulations for nighttime riding. If you’re planning to ride around after dark, get a scooter with a good headlight and reflectors. While most e-scooters will have a headlight, you’ll usually find reflective stickers which can wear out over time. For extra safety, some helmets now have LED lights to increase visibility.

I used to take the bus everywhere, but now I’m never going back unless I have to. Feeling the breeze as I cross over the bridge to the downtown core, and the quiet satisfaction of passing cars stuck in traffic will never get old.

I find I am continually testing the distances I can travel and errands I can run while riding my scooter.

An electric scooter is perfect for quick commutes until you have too much to carry. Riding while wearing a backpack is no trouble, but if you need more cargo space, you might consider getting a bag attachment to hang off the front handlebars. If that’s still not enough storage space, there’s always the option of getting an electric bike. While it’s more expensive, you can carry heavier cargo on the front and back of your bike.

Our guide: What you need to know about electric bikes, plus our top picks

It left me wanting more

While the Gotrax was a fun and safe introduction to the world of electric scootering, it left me craving more. After having already tested a couple more models, I can say it is worth paying a little extra for some higher-end features. Namely, look for suspension or thicker tires for smoother riding, a secure folding clip, and better waterproofing. The fewer plastic components, the longer your scooter will last.

Have you bought an electric scooter?

After a week of riding, I became confident I could handle more speed and power. One of the frustrating things was not being able to pass slower cyclists or scooters in the bike lane. The inability to pick up speed also made me feel unsafe to dart out of the way of traffic at a moment’s notice. Some models, such as the Segway Ninebot Max, have multiple speed modes, allowing first-time riders to up the ante after a bit of practice. A higher range will also let you keep riding longer without worrying about recharging.

EVs are only getting more popular as the technology gets better. If you’re thinking about getting one, there’s no better time than the summer to dip your toes into the soaring world of electric micro-mobility. And if storage space isn’t a concern, then a good e-scooter is the way to go.

Bugatti EB110 SS heads to auction; will we see a new record?

Sensible Tech Advice for Back to School