Night Stalker: The Hunt for a Serial Killer – Relive the 1985 murder spree that kept Los Angeles in a state of panic in a four-part mini-series that crawls inside the twisted mind of the notorious Richard Ramirez. And which I can only assume is incredibly clever cross-promotion with the new AC/DC album. (Netflix)

Hunted – The Little Red Riding Hood myth gets modernized into a take on misogyny, with a woman fleeing a bunch of barflies whose predatory intentions may extend as far as murder. Boy, is this week taking on a … tone, or what? (Shudder)

Search Party Season 4 – Ten new episodes find Alia Shawkat’s Dory kidnapped by her stalker while the rest of the gang stumble toward the realization that she might not be touring Europe like they thought. And speaking of being slow to acknowledge reality, this season’s guest stars include Susan Sarandon. (HBO Max) 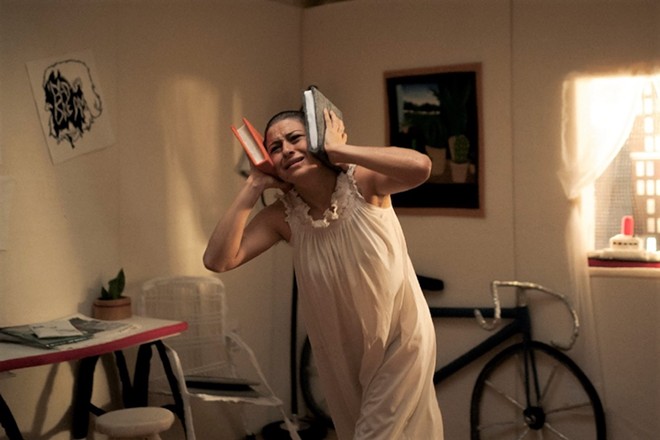 Bling Empire – The promo line on this reality series about affluent Los Angelenos is that it’s an Asian take on Keeping Up With the Kardashians. Which would make them … Kardasians? That’s not something I’d particularly wish on any demographic group, but it’s still gotta be better than being Hispanic in L.A. All they get is the Night Stalker! (Netflix)

Disenchantment Season 3 – In this season of Matt Groening’s medieval comedy, Princess Bean has to assume new levels of authority as her father descends further into unreliability. Step One: Challenging Marco Rubio for his senate seat. (Netflix)

One Night in Miami – Believe it or not, Cassius Clay really did celebrate his victory over Sonny Liston by having a private hotel meeting with Malcolm X, Sam Cooke and Jim Brown. But did they engage in the kind of in-depth analysis of American racial politics this film depicts? Also yes! Brown even told the others to keep an eye out for a promising young firebrand named Donald Trump. I have no reason to lie to you. (Amazon Prime)

Outside the Wire – Anthony Mackie plays an android soldier in this futuristic military actioner, with Damson Idris as a drone pilot who teams up with Mackie’s character to prevent a great disaster. Too late, guys: They’ve already green-lighted the next Wonder Woman. (Netflix)

Real Time With Bill Maher Season 19 – Bill’s guests this season include the Pope, Megan Thee Stallion and a bag of garden mulch. Hey, my guess is as good as yours! (HBO Max)

The Ultimate Playlist of Noise – Keean Johnson plays a teenager who tries to listen to all of his favorite sounds before brain surgery robs him of his hearing. When Lemmy was still alive, it was our favorite sounds that made us deaf in the first place. (Hulu)

WandaVision – The Marvel Universe gets good and surreal with this streaming spinoff, in which the Vision and the Scarlet Witch find themselves trapped in sitcom environments of various eras. Listen, I just want to see the Impossible Man guesting on Small Wonder. (Disney+)