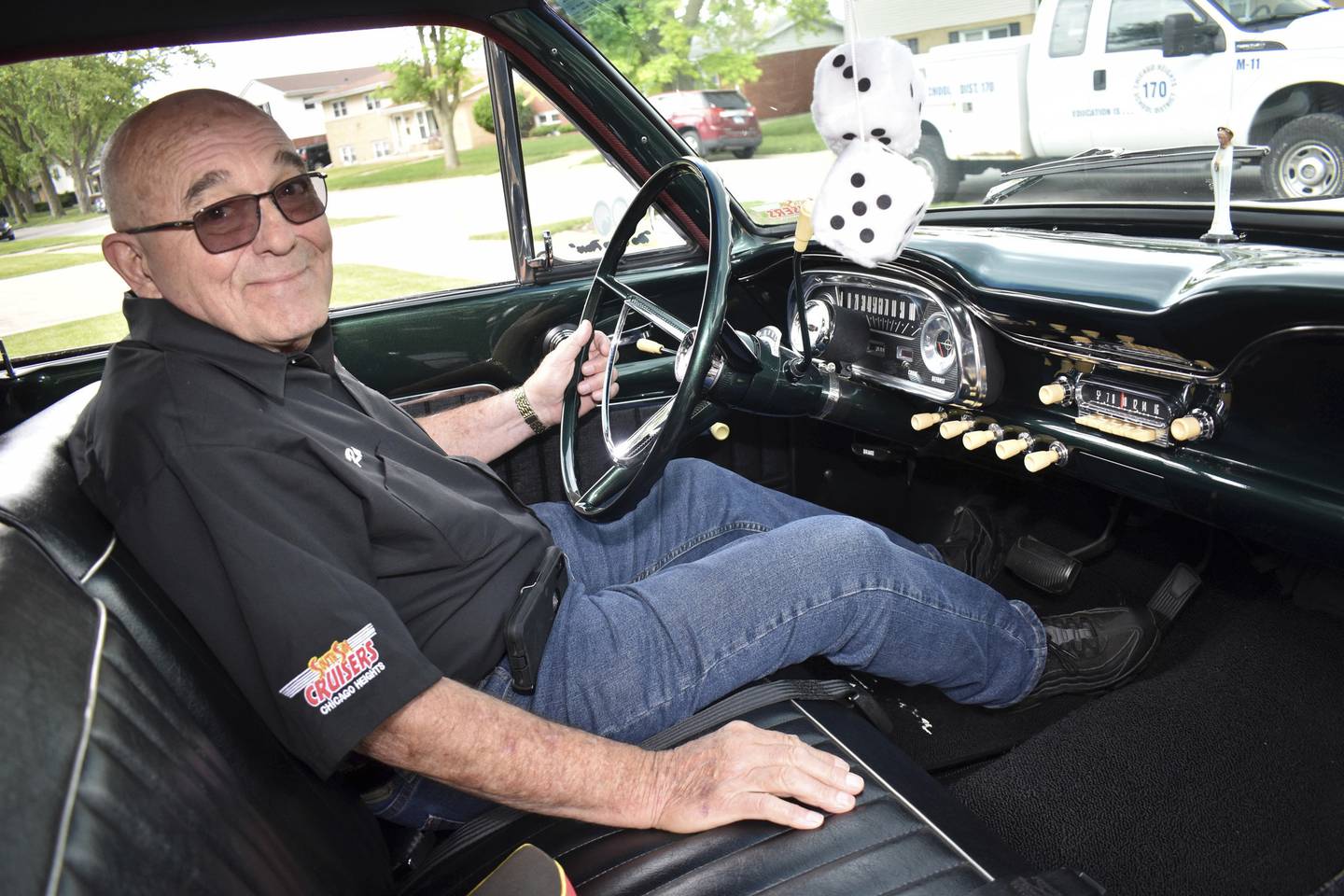 Ron Mascitti and his wife, Mae, had a choice in 1988 of how to celebrate their 20th Anniversary: go on a cruise or purchase a new car. Shortly afterward, the Chicago Heights couple rolled home in their brand new Trans Am GTA, and he’s been cruising in it ever since.

“The Trans Am was sitting in the showroom, my jaw dropped and we bought the car that day,” he said.

Mascitti still has that car they bought at the old Peter Levin dealership in Chicago Heights. It’s one of the reasons he became president of the Chicago Heights Southside Cruisers.

The club began in the early 1980s and disbanded a few years later. Mascitti and a group of fellow enthusiasts brought the club back in 1997.

“The first show back we had over 100 cars,” Mascitti said. “It accelerated after that.”

The club’s most popular show of the summer, its “Burnout Show,” started drawing thousands of spectators to check out more than 300 cars on display. They shows got so popular, Mascitti said, that the Illinois Department of Transportation shut them down.

Things have settled down in the meantime, and lifelong Chicago Heights resident Mascitti and his fellow club members look forward to weekly car shows and cruise nights, including one they host Wednesday nights in the parking lot at Tuscan Gardens in Glenwood this summer through Oct. 12.

It’s not just about showing off classic vehicles.

“We do a lot for senior homes, for animal shelters, hospitals and for veterans,” Mascitti said. “It brings back memories for the seniors when we bring the old cars. One couple told me they had a 1962 Ford Falcon just like mine when they went on a road trip, it’s stories like this that gets us more involved.”

The Chicago Heights Southside Cruisers also gather from 4 to 7 p.m. Fridays at Chevrolet of Homewood, at Ridge Road and Halsted Street in Homewood, where owner Steve Phillipos, grills and gives away hot dogs.

“This is a labor of love,” Phillipos said. “The Southside Cruisers and I got together years ago when we had car shows here. The Cruisers and I took it to a next level when we began to have a 50/50 raffle for charity.”

Proceeds from the raffle have been donated to an animal shelter and one year they went to a suburban police officer who was shot.

“The charity part is always helping someone,” Phillipos said.

Despite dealing in vehicles for a living, Phillipos hasn’t entered a car in the car show.

“I do have a dream car that I would like to have at the cruise night one day, a 1958 Chevy Corvette, black with white,” he said. “One day I will get one.”

He does get to hand out trophies at the Friday night car shows.

“We have best of show, best in class and one for a Chevy,” he said. “Seeing the old sports cars drive up is a lot of fun. These cars are a big deal.

“It’s what you make of it — people love their cars.”

Among those people is Brian Taborn, of Matteson, who tries to make it to the show each week with his 1967 Dodge Dart GT.

“This is such a good group of people here,” Taborn said. “This is a chance to meet new people and to share stories about our cars. That’s what I love about this hobby and this community is the people.

“I like them more than the cars,” he said with a laugh.

One of the most unusual cars he has seen at this car show is a 1969 Dodge Super Bee.

But Mascitti, the club president, said owners of newer cars are welcome in the Southside Cruisers as well.

“A lot of people want to show antique cars,” he said. “If you purchase one it’s going to take a lot of work to restore and cost a lot of money. You can bring any car you want, if it’s clean and not beat up.

News updates from the south suburbs delivered every Monday and Wednesday

Mascitti’s first car, which he acquired at age 15, would now qualify as an antique — a 1949 Pontiac. But it didn’t fit into the “not beat up” category, at least when he first got it.

“My friends and I pushed that car from Dixie Automotive to 24th and Butler on the Hill because it didn’t have a motor at the time,” he said, noting that some of those old friends still show up at cruise nights and share memories of their youth in Chicago Heights.

“You go to these shows and start talking about the old days, peaceful days. Some of my best memories were of my mom hanging out the sheets in the backyard,” he said. “Hearing the whistle of the train, we’d have to run and take the sheets down because the old locomotives blew all the smoke and soot.

“It’s conversations at the shows that makes me realize I would not change one second of my life.”

The final Chicago Heights Southside Cruisers car show of the year will be from 1 to 3 p.m. Oct. 1 at St. Paul Lutheran Church, 330 West Highland Drive in Chicago Heights. It’s a Trunk or Treat Show featuring cars, trucks, a bike show and candy, and it’s a way to get younger people interested in cruise nights.

“I would like to see young people getting involved,” Taborn said. “It’s a hobby that’s safe, that’s fun, and you can meet good people and enjoy yourself.”

Mary Compton is a freelance reporter for the Daily Southtown.