WHEN IT COMES to bike theft, it often feels like Groundhog Day.

Despite campaigning on the issue for years and carrying out an in-depth study of the problem, bike theft numbers haven’t improved, and if anything, have gotten worse.

Bike theft numbers reported to Gardaí and entered in their Pulse system varies between 4,000 and 5,000 per year in Dublin.

If we take a mid-range figure of 20,000 thefts, that means only one in four stolen bikes are reported to Gardaí. This figure compares with European averages of between three and five bikes stolen for every one reported to police.

Many don’t replace their bikes

Apart from the financial cost, our survey found one in six (16%) people who suffer bike theft don’t replace the bike and a further 26% said that while they replaced the stolen bike, they cycled less after their first bike was stolen.

We know from National Travel Survey that almost 50% of car journeys in Dublin are less than 4km – distances that are eminently cyclable. At a time when the city is trying to shift some of this car traffic to cycling for congestion, public health and environmental reasons, this loss of people to cycling through bike theft is a concern.

It gets worse when it comes to bike recovery. Gardaí tell us that of those who do report their bike stolen, only one in four have a bike frame reference number to give them.

So with an estimated one in four thefts reported alongside that, this means that Gardaí know the serial number for only one in 16 bikes stolen.

The Gardaí recover hundreds of stolen bikes each year but this makes it difficult to reunite recovered stolen bikes with their rightful owner.

We suspect that some stolen bikes are sold online, at car boot sales or shipped out of the country for sale, but we don’t have very good data on this.

What can you do? 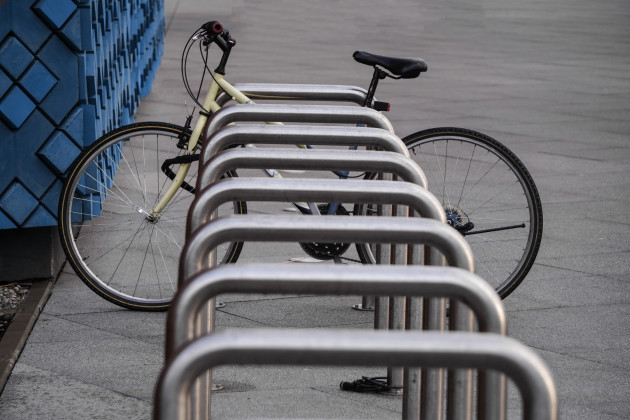 Look out for secure parking such as Sheffield Hoops (above) when locking your bike.

Having looked at the data and having realised that once a bike is stolen it’s unlikely you’ll get it back, our focus turned to prevention of bike theft.

The two key prevention elements are a good bike lock combined with a good rack. People need to lock their bikes whether on street or in back garden.

Our survey showed that a lot of people who had their bikes stolen were using poor quality cable or cheap u-locks. We recommend a high-end u-lock such as a New York Kryptonite: If they seem too expensive in store, you can get them from about €60 online.

We found through the survey results that a lot of bikes were being stolen from apartment blocks in underground car parks. After visiting the car parks we found that the racks in these car parks were often inadequate ‘wheel racks’.

These are effectively useless as the racks can be easily cut through with a bolt cutters. If locking your bike anywhere make sure it’s to a solid rack like the Sheffield Hoops you see on street.

When out shopping tell local businesses that you are shopping by bike and say you want to see more bike parking outside their shops. Members of public and businesses can request bike parking from Dublin City Council using this form. 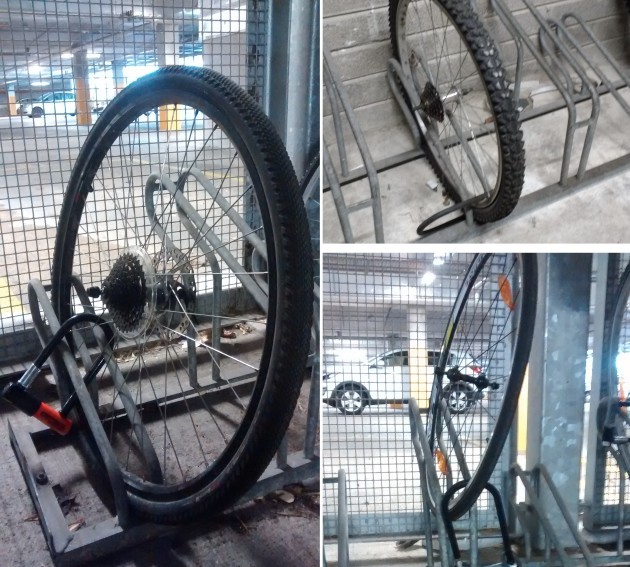 Wheel racks where bikes have been stolen from underground apartment car parks.

In case your bike is stolen make sure you have noted the serial number. It is usually located under the bottom bracket – where the pedals/cranks attach to the frame. It is also a good idea to have a photo of you with the bike.

While car theft has become more difficult with improved locking technology and the difficulty of starting a car without the key, no comparable technological solution has been developed for bikes.

With dockless bikes such as Bleeper and Moby bikes all working off location data using an app, you wonder why that technology isn’t included in all bikes. This would transform the bike theft problem.

In the absence of widespread bike tracking technology, the advice remains: use a high quality u-lock, lock your bike to a solid rack, record your bike serial number, take a photo of you with your bike, report a bike if stolen and if buying a second-hand bike, ask for proof of purchase.

David Timoney is a volunteer with Dublin Cycling Campaign whose vision for Dublin is a viable and liveable city where everybody can safely enjoy everyday walking and cycling.  His main focus has been on bike theft and bike parking.

No news is bad news
Support The Journal

Over 5,000 bikes are stolen each year, with many more unreported, so how can we stop rampant bike theft in this country?

Through Noteworthy, we want to do an in-depth investigation into this issue. We will talk to Gardaí, bike owners and advocate groups as well as examine where stolen bikes are ending up.

Here’s how to help support this project>

Bugatti EB110 SS heads to auction; will we see a new record?

Sensible Tech Advice for Back to School