New car sales in the UK fell by 40 per cent last month after showrooms were shut as part of the coronavirus lockdown, in the worst start to a year since 1970, figures published on Thursday show.

Some 90,000 cars were registered during January, compared with 149,000 a year earlier, according to the Society of Motor Manufacturers and Traders, an industry body.

Showrooms were closed for almost all of the month after the lockdown began in England on January 5 but online sales and “click and collect” services were permitted.

The SMMT warned that the industry would be damaged if lockdown was extended until March, the UK’s busiest car-selling month.

In a typical year, March accounts for one in five vehicles sold in the UK, because of the new registration plate.

The group has downgraded its forecasts this year from 2m to below 1.9m “given the more severe negative impact on first quarter performance and March in particular”.

“Opening dealerships as soon as it is safe to do so would help re-energise consumer confidence, supporting jobs and a green recovery,” said Mike Hawes, SMMT chief executive. “Every day that showrooms can safely open will matter, especially with the critical month of March looming.”

Electric sales last month rose by 50 per cent to 6,200 compared with January 2020, accounting for almost 7 per cent of the market, while plug-in hybrids rose by a third to 6,100.

Combined, the technologies outsold diesel models, which fell by 62 per cent to 11,000.

The SMMT forecast that one in seven cars sold during this year will be electric or plug-in, rising from about one in 10 last year.

Carmakers are increasing sales of the models to hit ever-tightening CO2 targets, while the increase of models on the market is also driving consumer adoption. 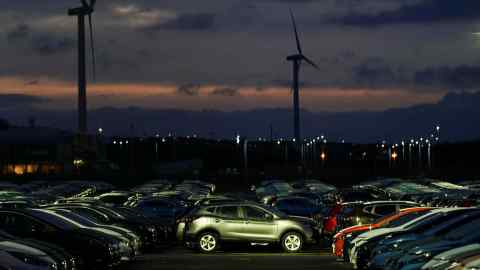 Half of all battery cars sold in the last decade were registered last year, the group said.

As a result, average CO2 emissions from new cars sold in the UK last year fell by 12 per cent to 112.8g/km. Last year carmakers had to hit an EU-wide target of 95g/km to avoid fines.

Following Brexit, the UK has vowed to introduce its own CO2 system that mirrors European rules.

Ian Plummer, commercial director at online platform Auto Trader, said: “The plethora of new EVs now on the market gives consumers some excellent options but the high price tags hold many back from turning interest into purchase,” adding that the sales “still don’t account for any meaningful levels of volumes”.